Build-A-Bear Workshop’s “pay your age” deal proved to be too alluring for its own good.

Only hours after it began, the bargain event was forced to shut down after chaos erupted across its U.S. stores.

The limited-time promotion kicked off Thursday morning in Build-A-Bear shops within the U.S., U.K, and Canada. For one day only, customers were given the chance to purchase the stuffed toys, which usually range in price from $20-$35, for the amount of their age. Children could take home a bear for only a few dollars, while adult prices capped off at $29.

But many were furious to find that the “pay your age” event had been canceled only hours after its launch due to safety concerns posed by unexpectedly large crowds.

“Per local authorities, we cannot accept additional Guests at our locations due to crowds and safety concerns,” Build-A-Bear said in a statement. “We have closed lines in our U.S. and Canada stores. We understand some Guests are disappointed and we will reach out directly as soon as possible.”

Build-A-Bear customers quickly took to social media to express their frustrations. Some waited in line for hours only to be turned away at the door when the promotion prematurely ended. 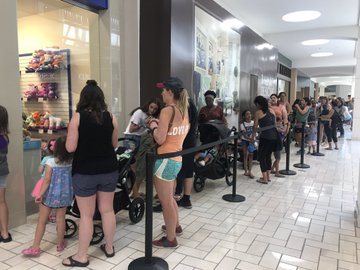 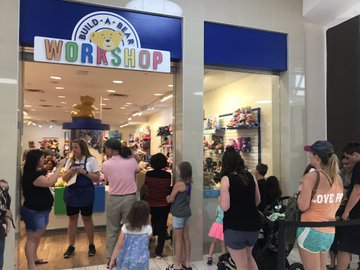 Build a bear MADNESS! 5 hour wait time and lines closed at most build a bear stores. This line is Tyson’s corner. @ABC7News

“Most customers expect crowds and long lines with a promotion like this. However, to be so ill planned that it has to be shut down so early is very disappointing,” wrote another user in a comment on the Build-A-Bear Facebook page.