US President Donald Trump has arrived in the UK for a four-day visit amid a flurry of political turmoil and planned protests against him.

After landing at London’s Stanstead airport after, Trump and his wife, First Lady Melania, went to the US ambassador’s.

They travelled there by helicopter because police were worried about him arriving by road because of the greater risk of large-scale protests against the US leader.

Al Jazeera’s Neave Barker, reporting from London, said that massive security precautions have been taken to keep the protesters away from the US president.

“We have seen nothing short of a ring of steel around the ambassador’s house here in London. We know that on the grounds there are heavily armed officers, dog patrols and not to mention President Trump’s own security detail,” Barker said.

“We have also started to see the start of protests. They have been modest for now, with just over a hundred people gathering here.”

Their trip will include meetings with Prime Minister Theresa May, who has described the US as Britain’s strongest ally, and is determined to secure a trade deal after the country acts on Brexit and leaves the European Union in March 2019.

Al Jazeera correspondent Jonah Hull said the political aspirations of the meeting are mostly to show Trump the importance of the relationship between the US and the UK.

“The first two days will be very much there to impress him, to keep him away from the scenes of protests taking place in central London,” Hull said.

“In the best-case scenario there will be some sort of progress on a trade deal between the UK and the US post-Brexit.”

Shortly before heading to the UK, Trump criticised May’s Brexit plan by saying he was not sure the British people are getting what they voted for.

“The people voted to break it up, so I imagine that’s what they’ll do. But maybe they’re taking a little bit of a different route, so I don’t know if that’s what they voted for,” Trump told reporters in Brussels.

May responded to Trump’s comments by defending her government’s decisions.

“We’re delivering on the vote of the British people to take back control of our money, our laws and our borders,” May said.

The UK government has recently been shaken following at least three resignations of senior members of her cabinet – including Foreign Secretary Boris Johnson and Brexit minister David Davis, following disagreements on how to exit the EU.

Trump, a longtime Brexit supporter and who called the UK “a pretty hot spot right now”, said he might speak to Johnson while in London.

Earlier, May said the partnership with the US is the UK’s most important relationship, especially with Brexit approaching.

“When we leave the European Union, we will begin to chart a new course for Britain in the world and our global alliances will be stronger than ever,” May said in advance of Trump’s visit.

“There is no stronger alliance than that of our special relationship with the US and there will be no alliance more important in the years ahead,” the British leader said.

Tens of thousands of people are expected to protest against Trump’s visit in central London on Friday, citing his alleged Islamophobia, controversial policies and “incendiary rhetoric” towards people with disabilities and the LGBTQ community.

Several protesters told Al Jazeera they wanted Trump to know he is not welcome in the UK.

“I don’t like the man. He’s a bigot, he’s a racist. I don’t like what he has done to the US,” one of the protesters told Al Jazeera.

“I just think that the majority of the people here and around the world, we don’t support him. He’s a racist, bigoted billionaire who represents the economic interests of the rich, the one percent,” another said.

A giant six-metre-high blimp of Trump depicted as an orange baby in nappies is also expected to fly over the capital.

The blimp, which has been given permission by the capital’s city hall to be flown above parliament square gardens, raised 18,000 British pounds (almost $24,000) from crowdfunding sources and has been described by former far-right UKIP party leader Nigel Farage as the “biggest insult to a sitting president”.

The organisers behind the blimp, however, said they were just “poking fun” and “hope Trump sees it”.

Yet Trump’s schedule will largely keep him out of central London. His meeting with May will take place in her Chequers country residence on Friday, followed by tea with Queen Elizabeth II at Windsor Castle.

Trump will then spend a private weekend in Scotland with his wife, where he owns two golf resorts.

The US president’s brash style and hardline “America First” policies have caused consternation across Britain’s political spectrum and society.

He was severely criticised last November, including by May, after sharing three inflammatory anti-Muslim videos posted by far-right group Britain First.

His criticism of Britain’s anti-terror policies after a series of attacks in 2017 also did not go down well.

Opposition MPS, backed by an online petition signed by nearly 1.9 million people, called on May to cancel the state visit offered when she met Trump in Washington after his inauguration in January last year. 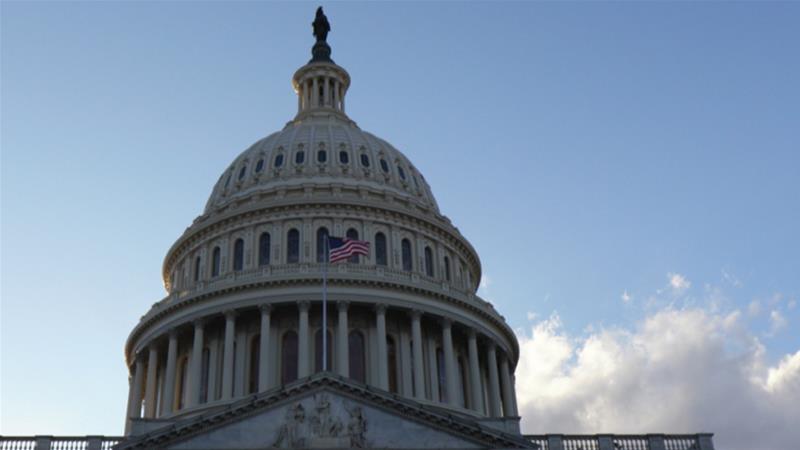 Life of the Party: American Politics in the Trump Era