Happy Fortnite day (again)! Season 8 is here, and with it the patch notes detailing what players can expect from the upcoming season of Fortnite.

If you’ve been following the teasers released over the past week, you’ll have guessed season 8 is all about pirates – and the new trailer reveals the narrative is following some sort of three-way battle between the Ice King, the Prisoner and a pirate crew (backed up by a couple of Fishsticks). Here’s the official cinematic trailer to get you hyped:

So, what is season 8 bringing in terms of gameplay changes?

First up, it’s canon: pirate weapons are here. I mean this quite literally, as cannons are being introduced. These deal a whopping 100 damage with a direct hit, and 50 to enemies within a certain radius of the explosion. These are simply found throughout the environment, and sound a little like permanent turrets.

One of the major changes to Fortnite’s map this season is the addition of a monster volcano: and it’s not just there to look pretty. Lava will deal “1 damage per touch” and “cause players to bounce off the surface” like a high-risk trampoline. Somewhat more useful are volcanic vents, which will shoot both players and vehicles into the sky. Just don’t land in a river of lava – that would certainly be a hotdrop.

Along with the ominous volcano (which has mercifully demolished The Block), the entire top right-hand corner of the map is getting a re-work. New areas such as Sunny Steps and Lazy Lagoon should provide players with a nice and relaxed place to enjoy the scenery. Right?

A neat addition to progression is the party assist function, which essentially means squadmates can help you out with completing challenges. Players can enable this on a certain challenge before a match, which then allows party members to contribute towards progress on said challenge. This feature should certainly help players earn XP and battle pass tiers a little faster.

Of course, a new season means new cosmetics, and the battle pass trailer showcases many of these. Along with a banana skin and new pets (one of which looks like a Minecraft dog), battle pass holders will instantly unlock two progressive skins – Blackheart and Hybrid. Pirates of the Caribbean meets Godzilla: the cross-over nobody expected.

Surprisingly, the ice areas of Fortnite’s map are remaining, but some of the snow-themed items are certainly feeling the heat. As confirmed in a recent Fortnite AMA, planes are being vaulted from the game, along with the sneaky snowman, chiller grenade, shopping carts and all terrain karts. I guess nobody would have been fooled by a snowman on a volcano.

As was also revealed in the AMA, Fortnite is introducing an in-game world markers system to improve squad communication. Similar to the Apex Legends ping system, players can mark danger, locations and items (including rarity) with a few clicks.

Epic is also bringing some positive changes to the game’s audio. Footsteps are often difficult to pinpoint when creeping around inside buildings (like the coward I am), so the tweaks to make above above/below footsteps sound distinct are very, very welcome.

But perhaps most importantly of all, the patch notes detail the infinite dab has been extended from 11 to 12 hours in the lobby. That streamer who dabbed for 10 hours is going to have to up his game – again.

And, if you missed it, last night the inevitable happened: that cursed building in Tilted collapsed with the last of the tremors. The implosion itself was a little underwhelming, however. 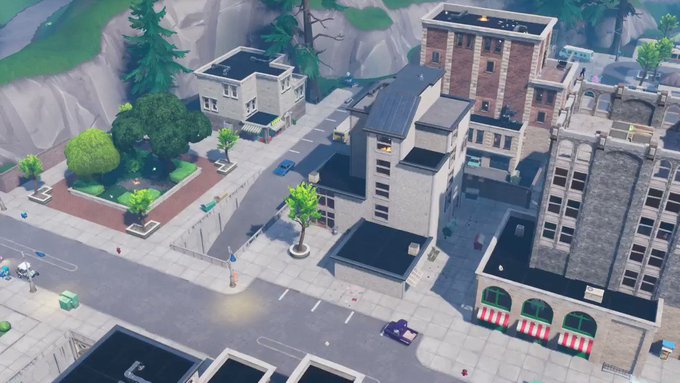 Here is a video of the final fissure destroying the Tilted Building. #Fortnite

Phew, that’s certainly a fair amount of features. With Apex Legends providing something of a challenge to Fortnite (at least on Twitch), Epic’s surely hoping it’s done enough to swing attention back to its own battle royale. The season 8 free battle pass giveaway should at least help with that.