It’s all about that talented forged composite wing, which looks like the flukes of a killer whale playfully breaching on a sunny afternoon. Huracán Performante Spyder’s rear wing is held high on two integral tubular arms that reach under the forged composite rear bodywork. When the valves built into the arms open, air from the engine compartment shoots up the tubes and flows under and through each side of the hollow wing, allowing Performante to slip through the air more easily at high speed. 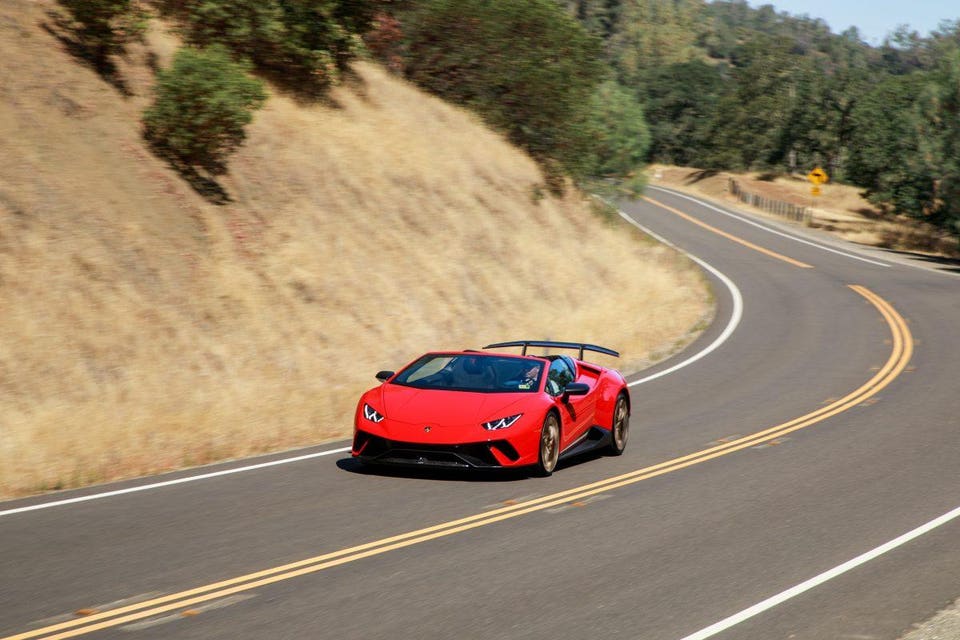 Huracán Performante Spyder benefits from active aerodynamics. The rear wing can also vector downforce on the left and right sides, and its function is felt in the driver’s gut, a thrilling sensation.DAVID BUSH

When the data drawn from the collection of black box brains and gyros of the stability control system command the two valves to shut, blocking the flow of air, that broad wing generates downforce. In basic function, the rear wing assembly of Aerodinamica Lamborghini Attiva (ALA) is like the Drag Reduction Systems (DRS) of a Formula One car. Though it does not change the Huracán top speed of 201 mph, Performante corners and accelerates with greater ability than other Huracáns. 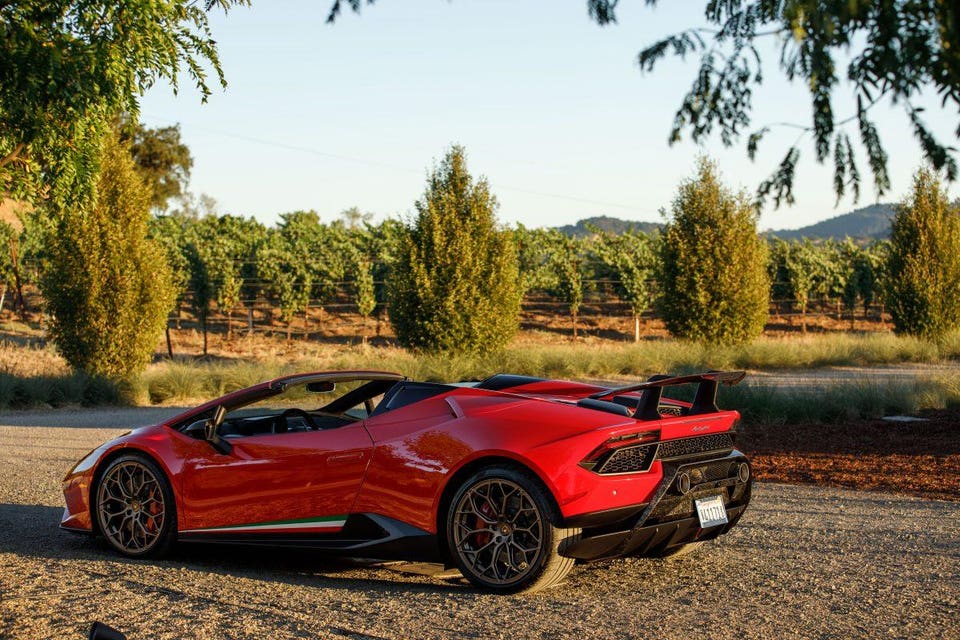 Because of the tidy little convertible section and thus different shape to the rear bodywork, the engine cover has unique venting to extract hot air from the engine bay. It is formed in forged composite like the active aero components.DAVID BUSH

Those valves can open in unison or individually to deliver a clever little trick in cornering: downforce exerted on the left and right sides of the wing can be varied, adjusted. Glide through a series of medium-speed left-right-left corners, fast enough that the car comes to life, and ALA shifts back and forth, too, helping stick those fat Pirellis hard into the pavement.

Active management of airflow with this elegantly simple system heightens the sensations of cornering, which is just as important as any measurable increase in performance. Pressure is felt shifting across chest, pulling through the gut, tugging at the neck. For pleasure seekers, this will be a new sensation not to be missed. It’s not how fast you go, but how you go fast. 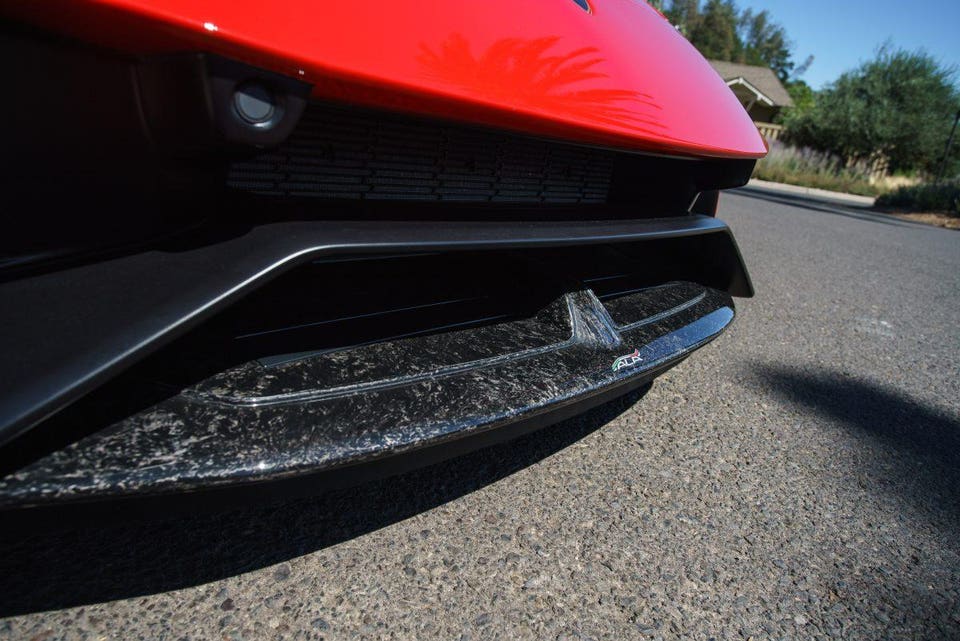 The front active aero is a simpler affair than the rear wing, a flap that opens or closes to allow air to flow through an S-curve or not, adding downforce or reducing drag. It does not vector side to side. But that nose sticks.DAVID BUSH

ALA up front is more basic, a classic under-chin S-shaped passage that opens to reduce drag at high speeds, and closes to exert downforce on the front structure during braking and cornering. There is no vectoring aspect up front. 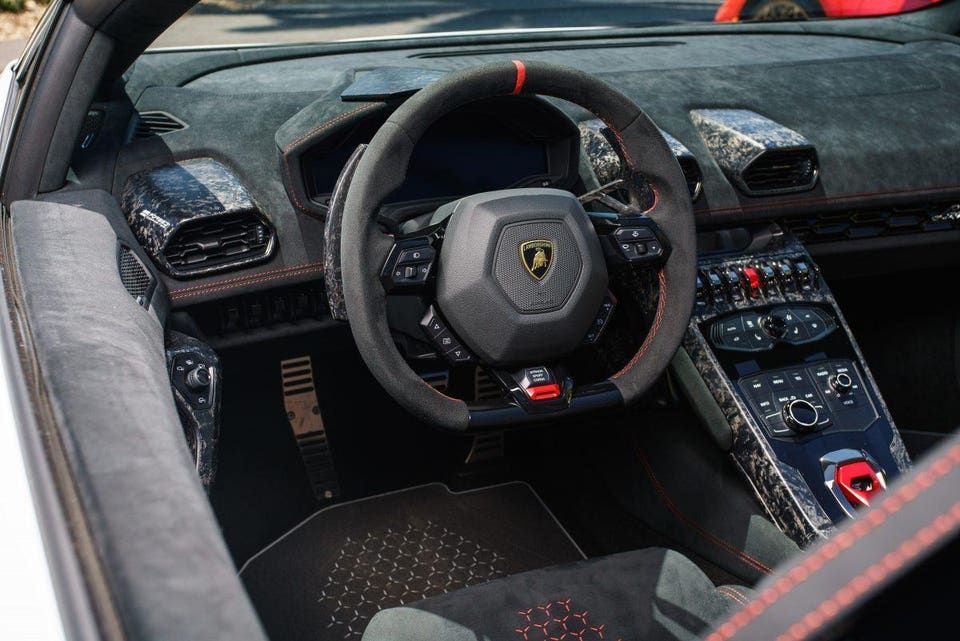 Steering column has a wide range of adjustment. If you can spend $308,000 on the car and you’re much more than six feet tall, travel to Italy to meet the guys who lead the company, and have them suit you up with special mounting and even custom padding and shape for your driver’s seat to gain the room needed. They will do it.DAVID BUSH

ALA brings a new dimension to what my old engineering pals consider a holy grail: predictable transitional handling, meaning a smooth roll rate with no abrupt motions when changing direction, back and forth. Well sorted magneto-rheological shocks, nicely weighted steering that harmonizes with suspension action, and that blessed wing out back deliver the goods. Anyone who revels in the efficient, fluid left-right-left movements of snow or water skiing, feeling energy through the hips, knees and torso, that joy of the body following where the head aims, will understand immediately. ALA elevates Huracán’s poise and capability, successfully updating a car that has been with us four years. And that wing is a conversation piece at the valet stand. 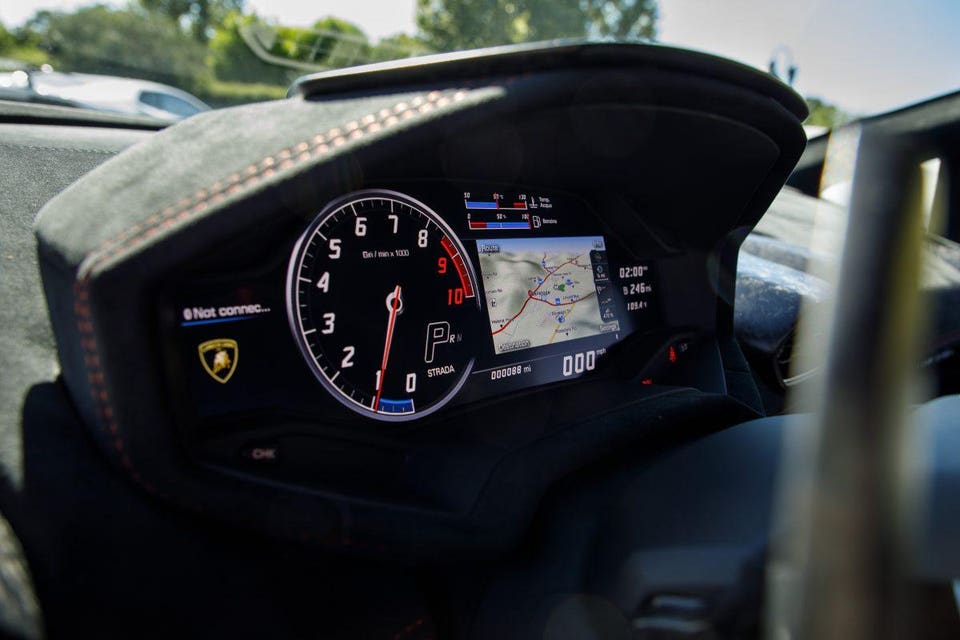 Huracán Performante gauges are driven by the top NVIDIA chip used by the luxury brands of the VW Group. Colors are spectacular, renderings ultra crisp.DAVID BUSH

Huracáns of all varieties are blessed with a musical instrument of increasing rarity: a naturally aspirated large-displacement purist sports car engine. Revs rise and fall nearly instantaneously in this 5.2-liter V10, with commensurate top tenor screaming and wailing when the engine is about its business. With an additional 30 horsepower, the Performante variant of the Huracán V10 spins out 640 at 8000 rpm, and will happily play above 4000 all day long, intoxicating music and motive power the reward. That 8000-rpm range is fully exploitable, completely enjoyable, the engine clearly willing and eager to rev beyond the 8000-rpm limiter. Running down a straight two-lane in wine country, it’s impossible not to paddle up, down and up again to compose a joyous, full-throated opera. 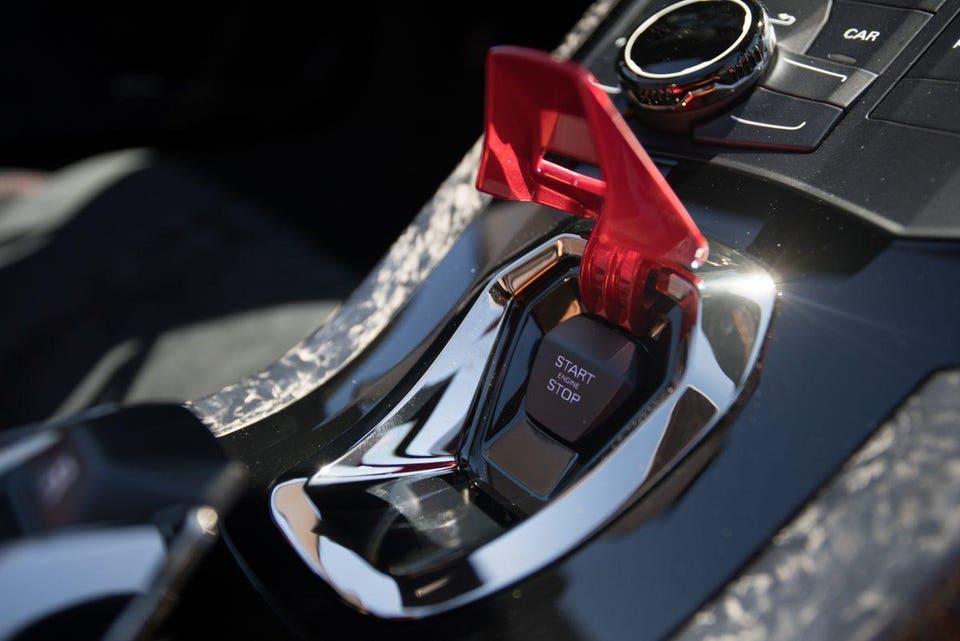 Time to fire it up. Lamborghini switchgear presents like no other, unique in appearance, yet the switches behind are sourced primarily from Audi, which means they work extremely well and will prove very reliable. As the CEO of a luxury car maker once said to me, “It would be madness, madness for us not to use the switches and electrical architecture from our parent group.”DAVID BUSH

The added power and related calibration changes cut 0.3-second off the sprint to 60 mph, which at a breath over 3.0 seconds brings Performante Spyder to rough parity with its competitors in that most frequently exploited measure of performance. 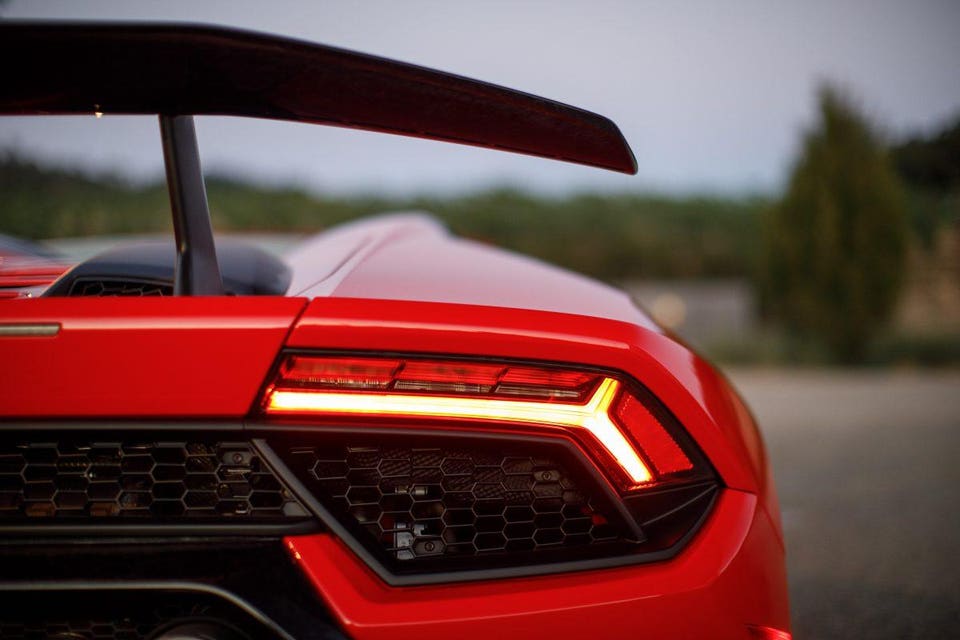 The distinctive Y-shape that repeats throughout the design.DAVID BUSH

The power also cuts 0.9-second off the sprint to 124 mph (200 kph), which will make it very nearly a second quicker in that other favorite U.S. measurable, the quarter mile. If you must have that last tick more performance, Performante coupe is two-tenths quicker still to 60 and 124 mph, but then you’re giving up moonlight drives. 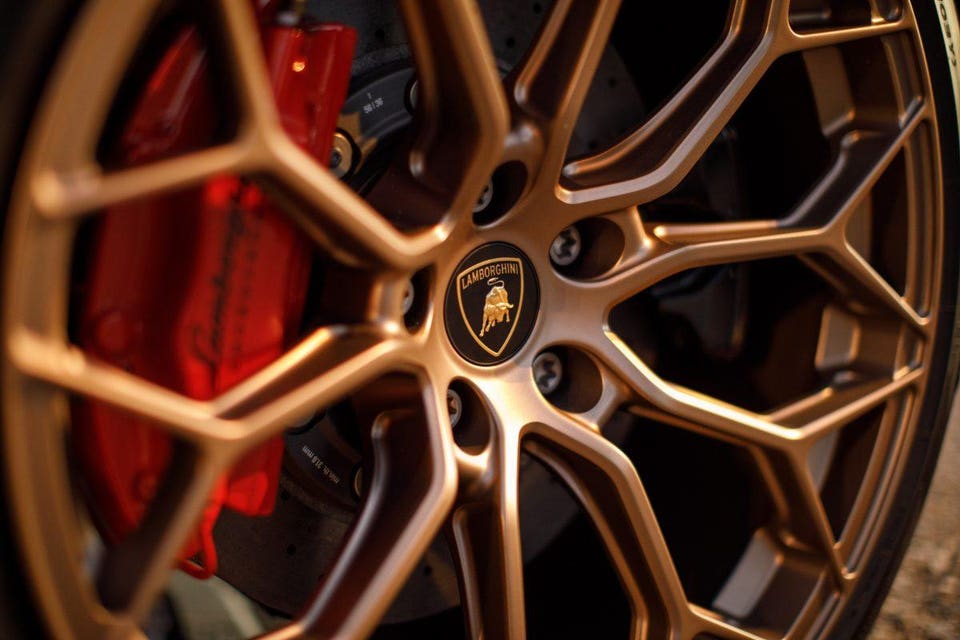 I’ve witnessed people holding revs at 7000 rpm on long straights while traveling at well above any posted speed limit, just to hear those ten pistons sing, even if a couple of bumps up the extremely smooth and quick gearbox would be the more prudent approach—leave such prudence to the Germans. Performante not only possesses the power and the glory, but the engine has proven itself tough and durable, capable of very hard use on a regular basis. No need to baby it. 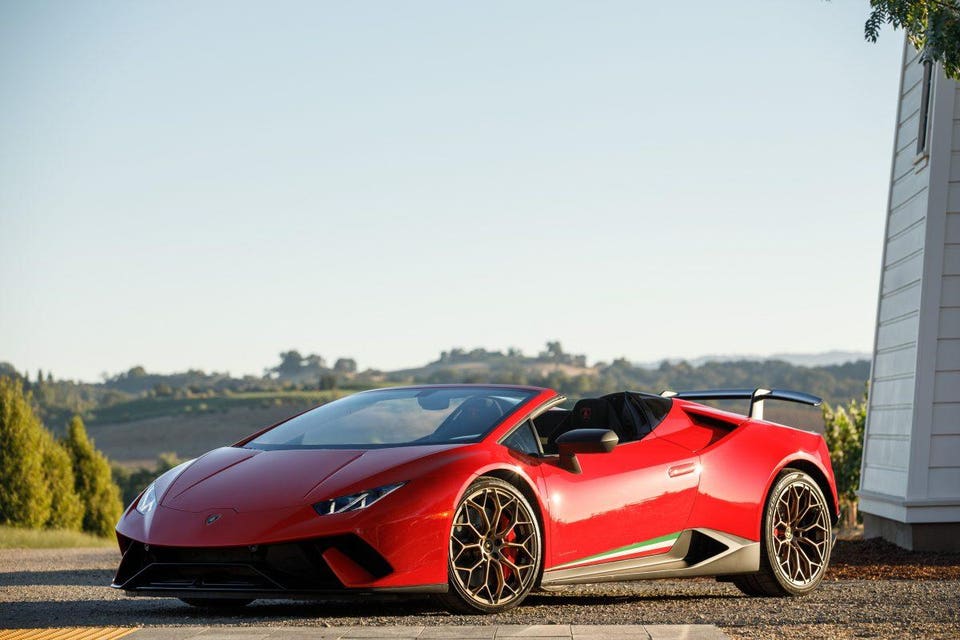 Huracán Performante Spyder’s cabin is free of turbulence with the well crafted top folded under the rear bodywork. Perfect for a moonlight drive.DAVID BUSH

Though the aero elements and sculpted surface trick the lens of the camera, giving impression in photos that Huracán is of goodly proportion, she’s a tidy little craft. CEO Stefano Domenicali, chief engineer Maurizio Reggiani and design boss Mitja Borkert have toured the U.S. to meet customers committed to a purchase and measure them to ensure a snug but comfortable fit. For tall guys, it’s like ordering a custom suit. Off the rack, Performante works for those under six feet tall. I’ve been in a Huracán with the seating adjusted to OAF settings and it’s millimeter tight, but it works. 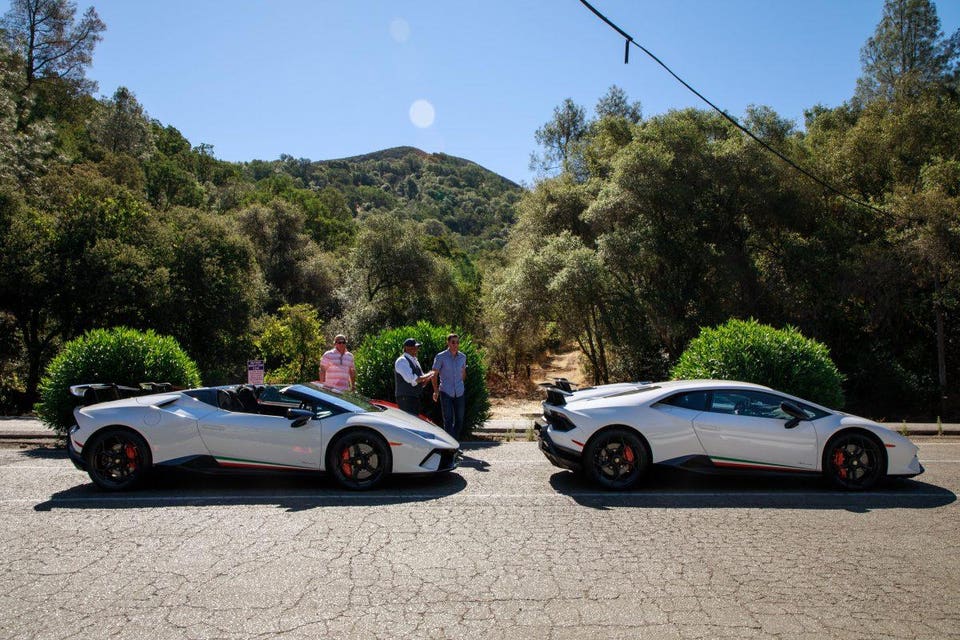 Your intrepid author in the coral and white shirt. At 6-3 240, it’s obvious why I qualify human factors comments with the phrase “I’m a big oaf.” I’m a market outlier. With adjustments to the mounting system of the seat, Huracán can fit me like a glove.DAVID BUSH

Performante’s interior is dressed in the same forged composite used to create the ALA components. Just like any luxe or exotic car, Huracán benefits from accessing its parent’s depthless engineering. Lamborghini switchgear works beautifully, just like in an Audi, Bentley, or Bugatti. Spend 20 or 30 minutes crawling around the car and the precision fabrication of each piece is evident. It may be exotic, but Performante Spyder is a tough little bull, and crafted with jeweler’s precision. 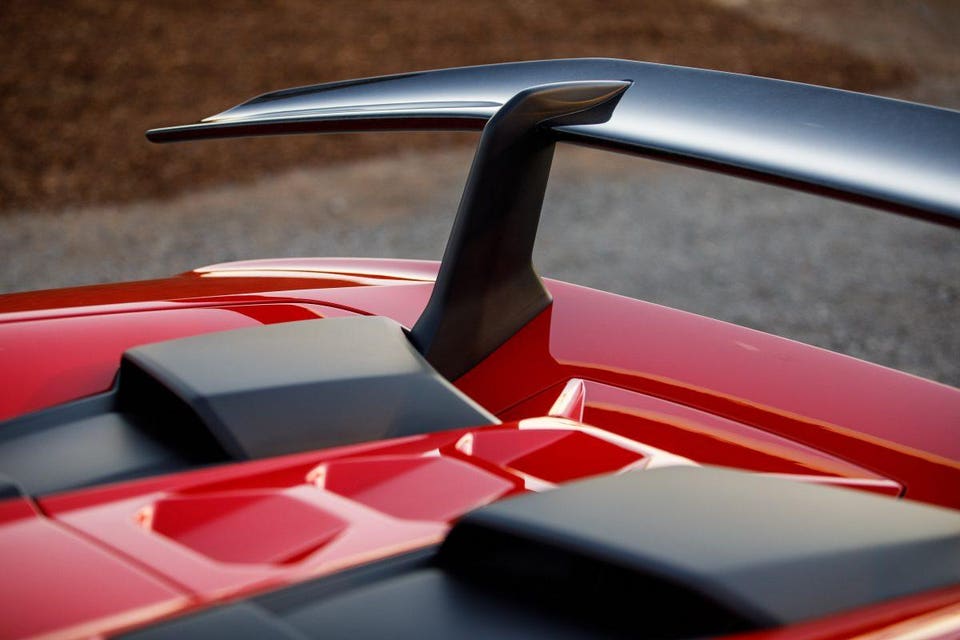 The arms holding the wing funnel air upwards from the engine bay. These arms have a little butterfly valve inside that opens and closes to flow air into and under the wing to change pressures and thus modify the amount of downforce placed on the rear suspension. Simple, and ingenious.DAVID BUSH

Performante is a logical progression of the powertrain, calibration, and aerodynamics of Huracán, the best-selling Lamborghini ever, the car that has secured Lamborghini’s long-term health and well-being. Lamborghini has sold just over 11,000 Huracán worldwide since introduction four years ago. That sales rate is balanced on a knife edge, ensuring Huracán and particularly Performante ownership is an exclusive club, yet it’s a large enough volume to shift and open the population of owners, changing and expanding the character of the brand. 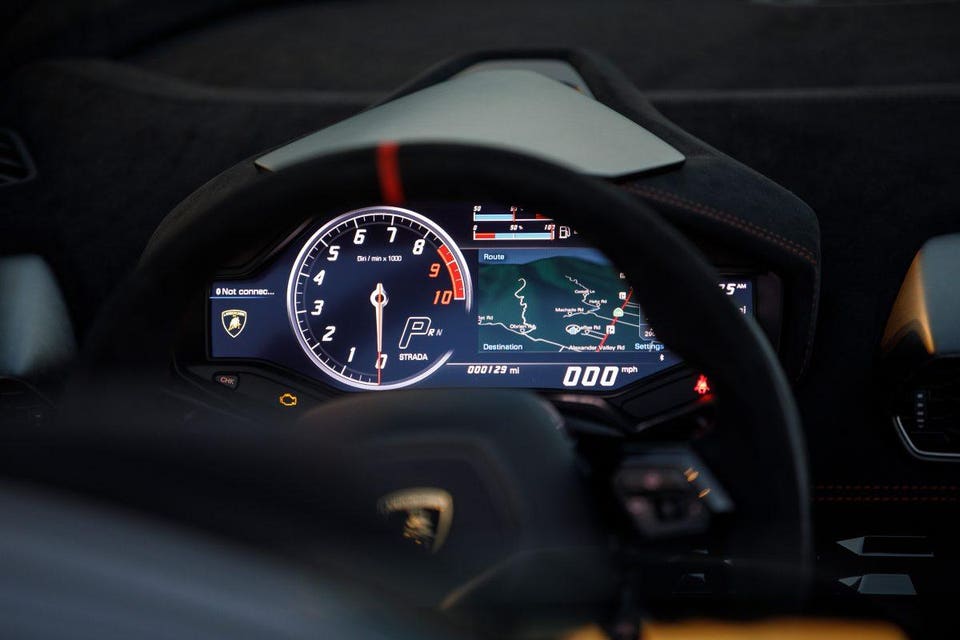 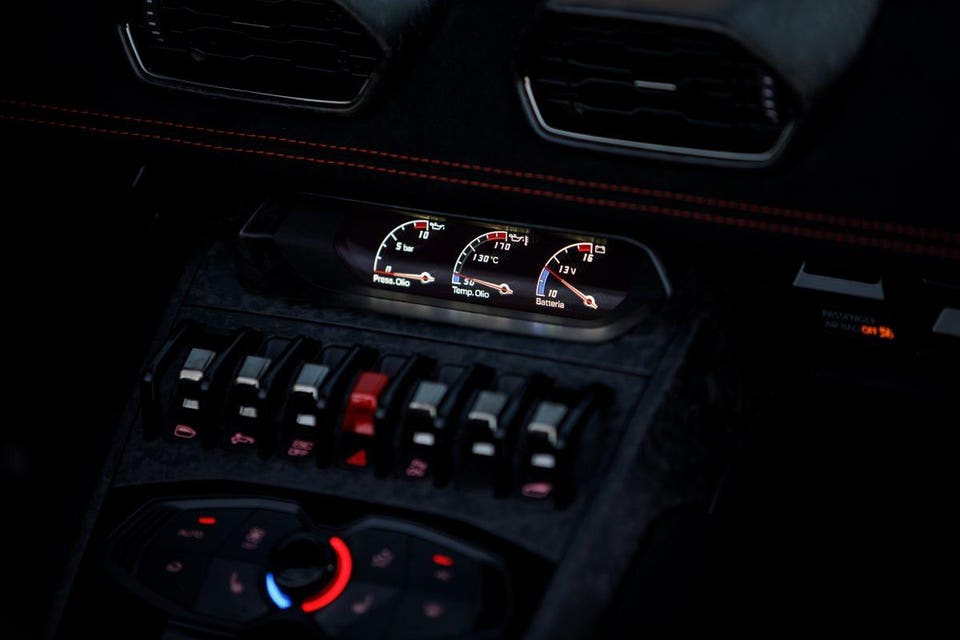 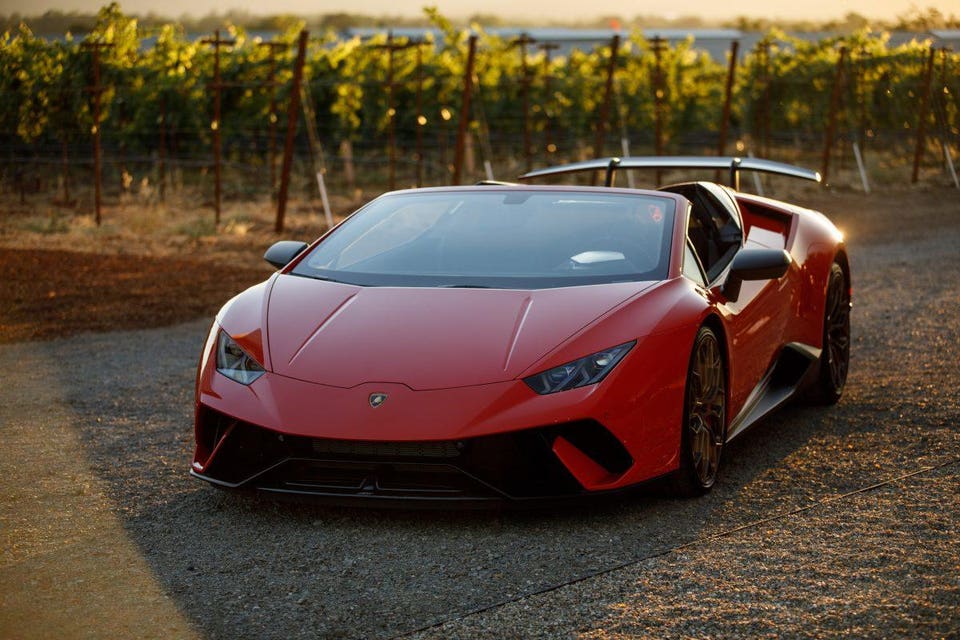