Every year at the Geneva Motor Show, I fall in love with Lamborghini’s Huracán anew. In 2016, the Italian brand that’s most closely associated with the color yellow introduced a red Huracán. I swooned. In 2017, the color of choice was orange. I was enchanted. For 2018, Lamborghini is stepping up its cosmetic alterations by also making its latest Huracán convertible. The new Huracán Performante Spyder, painted a gorgeous matte blue, made its debut here in Geneva, and I’m once again delighted by it.

The truth about this car is that its proportions are basically perfect. It’s angular, yes, but not so much as to offend the human eye or the laws of aerodynamics. It’s also streamlined, but not so much as to look identical to every other supercar trying to hit the lowest possible 0-60 time. The Huracán has both character and performance, and that’s why it’s the perennial Geneva Motor Show car that I simply have to grab photos of.

Naturally, Lamborghini couldn’t launch a new variant of the Huracán without it being the most powerful one yet. The Performante Spyder weighs 35kg less than its predecessor 4WD Spyder, and is built out of an aluminum-carbon fiber composite, which Lamborghini calls Forged Composites. The 640-horsepower V10 engine has been “completely updated and redesigned, with fluid-dynamics optimized at both intake and exhaust.” Max speed is 201 mph and 0 to 62 mph is reached in a hair-ruffling 3.1 seconds. Oh, and it sounds amazing, which is an important aspect for a car intended to be driven with the top down.

Lamborghini’s pricing for this convertible Huracán has gone up quite considerably relative to the original coupe, with Europeans expected to spend €220,000, before taxes, and Americans being asked for $309,000, also before taxes. Not that it should be any surprise, but looking and sounding fabulous in the summer’s hottest Lambo won’t come cheap. 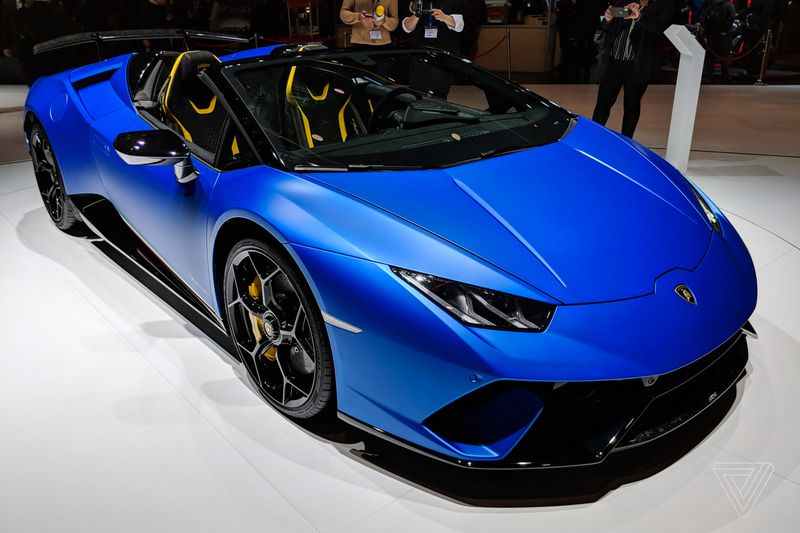