The US has determined that Pyongyang used a highly toxic nerve agent VX to kill Kim Jong-nam, the half-brother of North Korean leader Kim Jong-un, according to the US state department.

Heather Nauert, the state department spokeswoman, said in a statement published online on Tuesday that Washington “strongly condemns the use of chemical weapons to conduct an assassination”.

“This public display of contempt for universal norms against chemical weapons use further demonstrates the reckless nature of North Koreaand underscores that we cannot afford to tolerate a North Korean WMD program of any kind,” she said, referring to weapons of mass destruction.

She also said the US conducted the investigation into the death of Kim Jong-nam in the airport of Malaysian capital Kuala Lumpur last year under the Chemical and Biological Weapons Control and Warfare Elimination Act of 1991 (CBW Act).

In response to the probe conclusion made on February 22, Washington imposed further sanctions on Pyongyang that took effect on Monday, Nauert said. 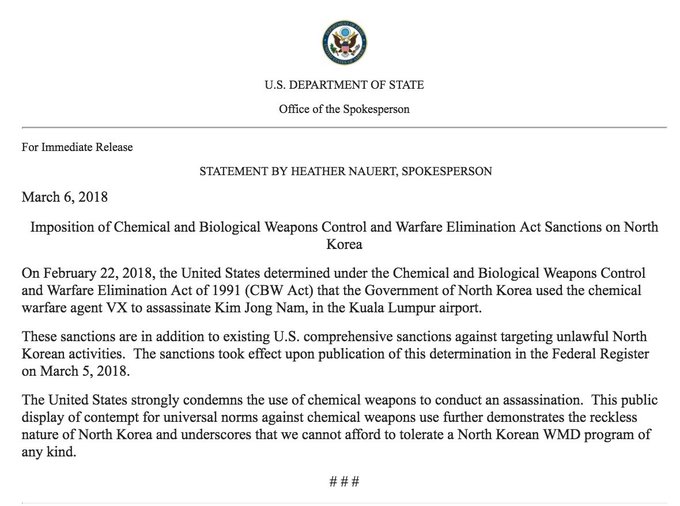 On February 22, the United States determined under the Chemical and Biological Weapons Control and Warfare Elimination Act of 1991 that the Government of #NorthKorea used the chemical warfare agent VX to assassinate Kim Jong Nam, in the Kuala Lumpur airport.

He had been living in exile, under Beijing’s protection, in the Chinese territory of Macau, and had criticised the regime of his family and his half-brother.