The big news is that Triple H set up a huge Wrestlemania clash with Kurt Angle after turning on the Raw captain. 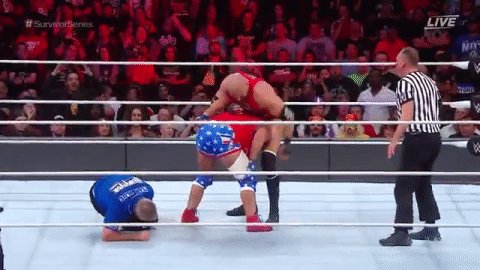 WHAT?! A #Pedigree by @TripleH to @REALKurtAngle just eliminated #RAW‘s GM from this match! #SurvivorSeries

He pedigreed Angle but still got the win for the Red Brand as he pinned Shane McMahon minutes later.

Brock Lesnar defeated AJ Styles in what was the match of the night as the two showed why they are champions.

The Beast manhandled the WWE champion but he soon was on the backfoot with Styles showing off his high-flying skills.

But an F5 after Styles attempted a Phenomenal Forearm was enough for the pin — but Lesnar looked like he injured his knee in the process.

The Shield kept up their unbeaten WWE streak by defeating The New Day in an entertaining bout.

Roman Reigns, Seth Rollins and Dean Ambrose delivered a powerbomb from the top rope on Kofi Kingston for the win.